Since the turn of the century, more than 25,000 claims worth nearly $300 million have been paid out by the Earthquake Commission (EQC) for damages caused by wild weather.

“With climate change it’s vital to know how weather-related events translate into financial liabilities for the Crown,” said Professor Ilan Noy, one of the authors of the research published by Motu Economic and Public Policy Research today. “This is the first in-depth analysis of EQC claims for weather-related events and is the beginning of understanding what we may face in the future.”

EQC covers homeowners for damage to land (and in some cases to dwellings and contents) caused by landslip, storm or flood. Between 2000 and 2017, the mean amount paid out to claimants was $11,420.

“The total paid for land damages was $199 million, for building damage it was $93 million and $2.6 million was paid out for damages to contents,” said Professor Noy. “Only houses with private insurance can receive a payout from EQC and there are some strict constraints on what is covered, so 41 percent of claimants didn’t get any money.”

Around a third of the total number of payouts by EQC were in response to five events: 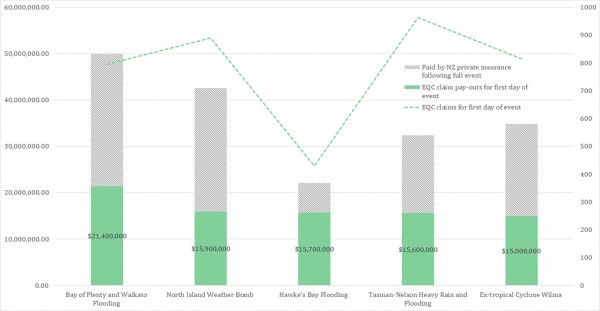 “Locations with a median income in the top forty percent of incomes tend to report more than half of the total claims and pay-outs made. This suggests that, after extreme weather events, higher-income families make more frequent use of EQC insurance and claim more payment than the average New Zealand family,” said Professor Noy.

The reasons for this increase in EQC pay-outs associated with higher income households are not yet entirely clear. They could be associated with better access to the system, higher exposure due to location preferences of various income groups, or higher damages caused by higher asset values (e.g. larger homes and larger housing footprints).

“We are only just beginning to provide insights about the increasing risk that current and future residential areas might face, given the possibility of increasing frequency of extreme weather events,” said Professor Noy.

“This paper is the first part of research which we hope will ultimately project the financial liability from climate change for EQC, and through it, the Crown” said Professor Noy.

The full working paper “Public insurance and climate change (part one): Past trends in weather-related insurance in New Zealand” by David A. Fleming, Ilan Noy, Jacob Pástor-Paz and Sally Owen is now available on the Motu website. It was funded by the Ministry of Business, Innovation and Employment through the Deep South National Science Challenge’s Impacts and Implications Programme and the Resilience National Science Challenge.

Public insurance and climate change (part one): Past trends in weather-related insurance in New Zealand (2018)