The most recent research from Motu Economic and Public Policy Research Trust looks at whether the introduction of ultrafast broadband has had any impact on the productivity of New Zealand firms.

“The simple answer to that question, is that the introduction of ultrafast broadband connections – when considered in isolation – has had no discernible effect on productivity” said Arthur Grimes, Senior Fellow at Motu. “Even focussing on industries where we would expect the effect to be more likely to be positive, we failed to find any related improvement in firm performance.”

Since the turn of the millennium, the importance of the internet has been touted as a factor to improve firm performance. The result was surprising, so the researchers looked deeper to see if more complex factors were at work.

What they found was that firms that adopted ultrafast broadband were more likely to invest in complementary information and communication technology (ICT) strategies, like shifting their production towards more ICT-intensive products.

“It looks as if firms that make complementary ICT investments at the same time as they adopt ultrafast broadband improve their productivity and also their business outcomes,” said Dr Grimes. “Firms that take advantage of the technology tend to have better results in areas such as improved production efficiency and sales and marketing methods.”

The New Zealand Government's Ultra-fast Broadband Initiative is designed to make fibre optic cable available to 80% of the population by 2022. The roll out was prioritised to connect all schools and hospitals by the end of 2015.

“Between 2010 and 2014, ultrafast broadband usage more than doubled from 9 percent to 22 percent of all private sector firms with 6 or more employees. By 2014, 62 percent of firms with more than 100 employees had fibre-to-the-door,” said Dr Grimes. 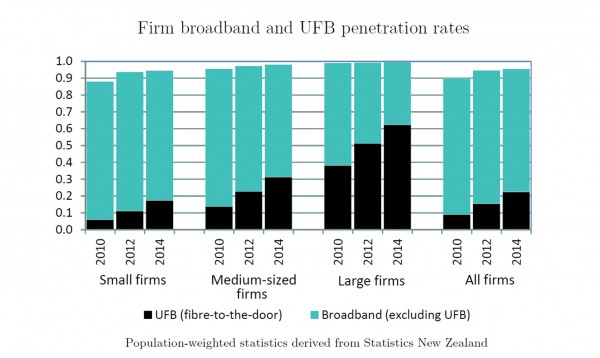 “While we cannot confirm that there is a causal relationship with productivity, firms that adopt fibre while making concurrent organisational investments are significantly more likely to report other positive outcomes from their ICT investments,” said Dr Grimes.

The research was compiled using information on 2,031 New Zealand firms with broadband and productivity data in 2010 and 2012. Fifteen percent of firms adopted ultrafast broadband over the period.

The independent report Picking up speed: Does ultrafast broadband increase firm productivity? by Richard Fabling and Arthur Grimes was funded by the Ministry of Business, Innovation and Employment (MBIE) under the “Resilient Urban Futures” research programme.