Director role: advice and influence at the highest level 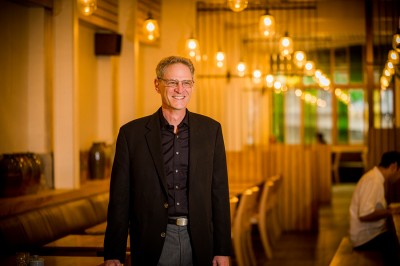 It doesn’t take long for visitors to the office of Adam Jaffe, Director of Motu Economic and Public Policy Research, to notice a framed replica of the Nobel Peace Prize on the wall. After letting curiousity build for a few minutes, Jaffe tells inquirers that he was a Lead Author for the Intergovernmental Panel on Climate Change, the U.N. organization that shared the 2007 Nobel Peace Prize with U.S. Vice President Al Gore. “I have one six-thousandth of a Nobel prize,” Jaffe likes to explain.

Jaffe is in the final year of his five-year tenure as Director and Senior Fellow at Motu, a non-profit research institute that is New Zealand’s top economic research organisation, housed upstairs from the Amsterdam coffee shop adjacent to Wellington’s bucket fountain.

Jaffe’s Bachelor degree was in Chemistry from M.I.T. This isn’t a common start for economists, but scientific rigour and a commitment to empirical research has typified his professional career from the completion of his PhD in Economics at Harvard. Economics, unlike chemistry, is a ‘soft science’, but Jaffe and Motu have an econometric focus, using microeconomics at an individual, group and firm level to research policy questions and clarify economic and social issues.

Jaffe is the top economist in New Zealand according to the Research Papers in Economics (RePEc) website, which ranks all economists and economic research organisations in the world based on the quantity and quality of their research publications. His reputation has enhanced Motu’s standing internationally and it is now in the top ten economic think tanks in the world ranked by RePEc. His reputation also opens doors for Motu internationally and his name provides instant credibility in the economics sphere.

Jaffe’s research focuses on technological innovation and how new technology spreads, particularly in relation to environmental and energy technologies, and science and innovation policy.

In addition to his scholarly activities, Jaffe is active in public policy formulation and debate. He has served on numerous panels and committees for the U.S. National Science Foundation, the U.S. National Institutes of Health and the U.S. National Academy of Sciences. He has also testified before the U.S. Congress on patent policy reform and served on the staff of the President’s Council of Economic Advisers in the 1990s.

“New Zealand is interesting politically as it is small and the politicians and business people are in many ways easy to access. I’ve enjoyed the ability to provide advice, and hopefully some influence, at the highest level,” said Dr Jaffe.

Jaffe’s policy acumen is well-recognized in the public sector in New Zealand and he was asked to join the Ministry of Business, Innovation and Employment’s Science Board in 2013, shortly after he arrived in the country. In 2013, Jaffe was also appointed as an advisor to the then Chief Economist at the New Zealand Treasury.

According to John Hay, Chair of the MBIE Science Board, "Adam brings both a clear analytical approach to science funding decision-making, and an in-depth understanding of social science. The latter was missing from other bio-physical science-focused Board members. In addition his expertise in statistics and econometrics is a most valuable contribution to Science Board discussions and decisions."

In 2014, Jaffe helped Motu cement its position with his leadership in the creation of Te Pūnaha Matatini, a new Centre of Research Excellence (CoRE) focused on the characterisation and analysis of complex systems and networks. The CoREs are multi-institution, multidisciplinary research collaborations funded by the Tertiary Education Commission. Te Pūnaha Matatini is hosted by the University of Auckland, and includes researchers from several other universities as well at Motu.

“Bringing Motu together with these other institutions to form Te Pūnaha Matatini is one of my proudest achievments. It allows economists, physicists, mathematicians and ecologists to share different ways of approaching and quantifying the impact of networks. “I think TPM is likely to help create new ideas. It may not be obvious what those are right now, but certainly the joint innovation and productivity research has real potential to improve the complex systems that affect people’s lives and livelihoods,” said Dr Jaffe.

Jaffe has also been instrumental in helping Motu form other key partnerships. Working with Vice Chancellor Grant Guilford and Pro Vice Chancellor Bob Buckle, he signed a collaboration agreement between Motu and Victoria University of Wellington. “The agreement with Vic has allowed Motu staff to teach and work with graduate students, and allows university students the benefit of exposure to Motu research. It connects and strengthens two of the premier economics and policy research organizations in Wellington,” said Dr Jaffe.

Another important research partnership is between Motu and the Productivity Hub (the Treasury; the Ministry of Business, Innovation and Employment; Statistics NZ; and the Productivity Commission) – a coup for Motu. This was secured through a competitive selection process and focuses on expanding the use of the microeconomic data held by Statistics NZ to study patterns and causes of productivity in New Zealand firms.

“It has been fascinating working with an organisation that is at the hub (forgive the pun) of public decision making. This project provides an excellent example of how Motu contributes to the knowledge base for public policy in New Zealand. We tie theoretical and methodological advancements to the real challenges that New Zealand faces, and study the important underlying forces at work, not just the specific policy challenges of the day. We believe that this kind of foundational work is key to building good public policy in the long run,” said Dr Jaffe.

Building on these partnerships, Jaffe’s tenure at Motu has seen its research base grow and stabilize, with the addition of additional research fellows, including an expansion to develop a new programme in agricultural economics and policy. At the same time, Motu has expanded its public education and dissemination efforts, in order to increase the impact of its research on public policy

In addition to advancing Motu as an organization, Jaffe has been active in his own research, having co-edited a book, and written or co-written thirteen papers and journal articles since coming to New Zealand.

“This has been an ideal job for me because Motu does economics that people care about. It’s not just publishing papers, but answering questions that make a difference to public and private decisions,” said Dr Jaffe.

But ask Jaffe about his greatest lifetime achievement, and economics does not come into it. “I was co-Captain of one of the teams in the first interscholastic Ultimate Frisbee game ever played. It was 1972, and we lost 51-7, but I was part of history.”

Dr. Jaffe and his wife Pam thoroughly enjoy living in Wellington. “It’s far away from everything, but the opportunities to enjoy life amid nature’s beauty are all around,” said Dr Jaffe.

If you are interested in applying to become the Director and a Senior Fellow at Motu, please go here.