Home » News » Sexism to blame for much of gender wage gap

Sexism to blame for much of gender wage gap

A world first examination of the gender wage gap has researched employees’ productivity to see how much sexism is to blame for the difference in women and men’s pay. 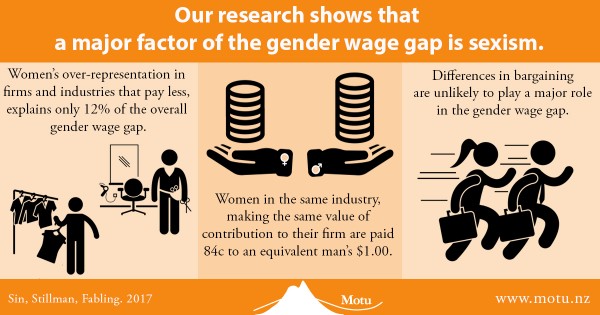 The study by researchers at Motu Economic and Public Policy found that men and women were statistically indistinguishable in how much value they add to their firms, but the average woman was paid only 84 cents for every $1 for the average man.

“This study is different to most previous wage gap studies in that it tests whether men and women are paid different wages for adding the same amount of value to their employer,” said Isabelle Sin, Fellow at Motu and lead researcher.

The study started by looking at 50 percent of the working population between 2001 and 2011 to see how much of the overall gap between women and men’s wages is to do with women working in industries that pay less.

“We found that women were over-represented in low-paying industries like food and beverage services, but this explains a mere 7% of the entire gender wage gap (or a couple of cents in every dollar),” said Dr Sin.

“If you add in the fact that women also tend to work in low-paying firms, we can say that 12 percent of the overall gender wage gap is due to the particular industries and firms where women work,” said Dr Sin.

The study then looked at productivity and wages of men and women in private for-profit firms with at least five employees and found a 16 percent gender wage-productivity gap, meaning women are paid 16 percent less for making a contribution of the same value to their employer.

“Previous studies used observable characteristics such as education and age to capture differences in the value contributed by employees. In contrast, we used employee-level data linked to business information. We looked directly at how the output of similar firms varies with the gender mix of the employees, and used this to infer the relative value male and female employees add to their firms,” said Dr Sin.

“We didn’t find any evidence that young women are paid less than young men for work of the same value, but there was a 16 percent pay gap for women aged 25-39, a 21 percent gap for those aged 40-54, and a 49 percent gap for older women.”
The gender wage-productivity gap is also higher for employees who have worked at the same firm for longer.

“For both genders, productivity is higher for workers who have been at the firm for longer, but the wages of women with greater tenure are not commensurately higher. That is, the gender wage-productivity gap does not go away once women have had the chance to demonstrate their worth to their employers,” said Dr Sin.

The gender wage-productivity gap was particularly marked in a few industries.

“The gap was over 40 percent in finance and insurance, telecommunications, transport equipment manufacturing, water and air transport, and electricity, gas and water, and rail. It’s worth noting that these are all sectors that have the potential for monopoly-created profits and have low competition,” said Dr Sin.

“To put it simply, our research suggests sexism is likely to be a major driver of the gender wage gap. What we’re going to do about it is another matter,” said Dr Sin.

Dr Sin is, however, encouraged by the ability to use this kind of analysis to better understand other workplace discrimination.
“This is a really useful methodology to look at wages gaps of all kinds. We’re hoping in the future to look at differences by such characteristics as immigration status, ethnicity, and family status,” said Dr Sin.

The paper: What drives the gender wage gap? Examining the roles of sorting, productivity differences, and discrimination by Isabelle Sin, Steven Stillman and Richard Fabling was funded by a Marsden Grant from the Royal Society of New Zealand.

What drives the gender wage gap? Examining the roles of sorting, productivity differences, and discrimination. (2017)