Niven Winchester is a Senior Fellow at Motu Economic & Policy Research. He specializes in economy-wide modelling for climate policy analysis. He spent 10 years as a Principle Research Scientist at the Massachusetts Institute of Technology and has built climate policy decision support tools for governments in several countries. In his spare time, he operates a rugby analytics web site, www.rugbyvision.com.

Will the All Blacks win their third successive Rugby World Cup (RWC) title in Japan in November? Who are their biggest rivals? Which team will be the ‘dark horse’? To answer these questions, we apply statistical models developed by Niven Winchester at his website Rugby Vision to estimate each team’s chances of reaching various stages of the competition, such as qualifying for the quarterfinals or winning the tournament. Our analysis first builds a rating system for international rugby teams, and then applies the ratings to estimate the expected result for each RWC game.

Current Rugby Vision Global Rankings and ratings points for the 20 teams that qualified for the 2019 RWC are displayed in Table 1. There are several differences in these rankings compared to the official World Rugby Rankings. Notably, New Zealand are the top-ranked team in the Rugby Vision Rankings but Wales are number one in the official rankings. Additionally, England and South Africa are ranked higher by Rugby Vision than World Rugby.

In Rugby Vision rankings, unlike in the official ratings, differences between rating points for any two teams equal the predict score margin for a game played at a neutral venue. For example, if New Zealand played second-ranked England, they would be expected to, on average, win by 6.81 points (130.11 minus 123.30) points, or 7 points when rounded to the nearest whole point. Home advantage is estimated to be worth 5 points, so this amount is added to Japan’s rating points when predicting games involving the host nation.

If the strongest team according to Rugby Vision’s rankings always won, Figure 1 shows how the knockout stages of the RWC would play out. However, as Japan’s victory over South Africa in the 2015 RWC and New Zealand’s early exit from the 2007 tournament illustrate, upsets do happen. In fact, it would be highly unlikely if all games were won by favourites, but we don’t know when those upsets will occur. 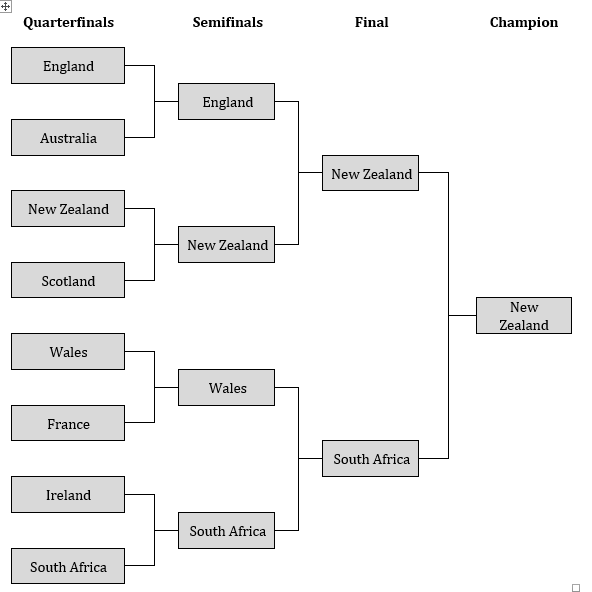 To get the full picture, we also need to account for the deviation around the average expected score, as estimated above. To see why this is important, consider a hypothetical case where New Zealand played England 100 times. The ratings estimate that the All Blacks would beat England by 6.81 points on average, but in some of those 100 games New Zealand would win by more or fewer than 7 points, England would win some games, and a small number of games would be drawn. It turns out that, according to the Rugby Vision’s model, the All Blacks would win 68 of the 100 games, England would win 29, and three games would be drawn.

To determine the probability of each team advancing to various stages of the RWC, we simulate the tournament 10,000 times. For each game in each simulation, a different value is used to account for the variation in expected score margin. On average, higher-ranked teams have a greater chance of progressing to the various knock out stages than lower-ranked teams, but sometimes lower ranked teams beat higher ranked teams.

Estimated probabilities of each team qualifying for the quarterfinals, semifinals, final, and winning the Webb Ellis Cup are displayed in Table 2. According to Rugby Vision, New Zealand are clear favourites with a 68.1% chance of qualifying for the final and a 53.6% of winning the competition. Despite playing in arguably the toughest pool, England are second favourites, with a 15.5% probability of winning the tournament, followed by South Africa with a 12.9% chance.

The estimates also reveal that while it is highly likely that New Zealand and South Africa will qualify for the knock-out stages in Pool B, other pools are more competitive. In Pool A, Japan has a 26.7% chance of qualifying for quarterfinals, at the expense of Ireland or Scotland; there should be a tight competition between France and Argentina for the second quarterfinal spot in Pool C; and there is a 10.4% chance that Fiji will cause an early exit for either Wales or Australia in Pool D.

So, that is how statistical analysis thinks the RWC will play-out. The chances of the All Blacks securing their third RWC title are about the same as correctly calling a coin flip. Let the (fun and) games begin!

For updates on the rankings, RWC forecasts, and game-by-game predictions follow @rugbyvision or visit http://www.rugbyvision.com/.