The Sir Frank Holmes Scholarship is named for one of New Zealand's past great economists. It is generously sponsored by The Hugo Group and is awarded annually to New Zealand's top third year university student in econometrics.

2019 is the seventh year of the scholarship, and we are happy to announce that Josh McSkimming of the University of Canterbury has won this year's prize. Josh is in his third and final year of a Bachelor of Science with a double major in Economics and Financial Engineering. His GPA is 8.81 from a possible 9 (meaning he’s gotten an A+ in nearly every course he’s ever taken, including microeconomics and econometrics at the third year level). He has a broad range of interests that include Risk and Insurance, and Macroeconomics and public policy.

He will use the prize money to help fund his study next year, when he will undertake a Master of Commerce in Economics. 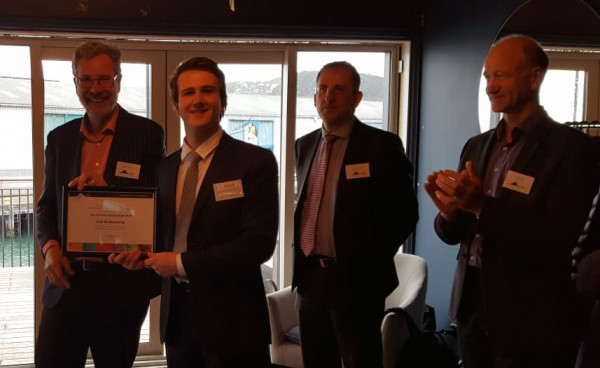 Arthur Grimes, Chair of the Hugo Group (and a Senior Fellow at Motu) hands the prize certificate to Josh McSkimming, while John McDermott (Motu Executive Director) and Bruce Wills (Chair of the Motu Research Trust) look on.